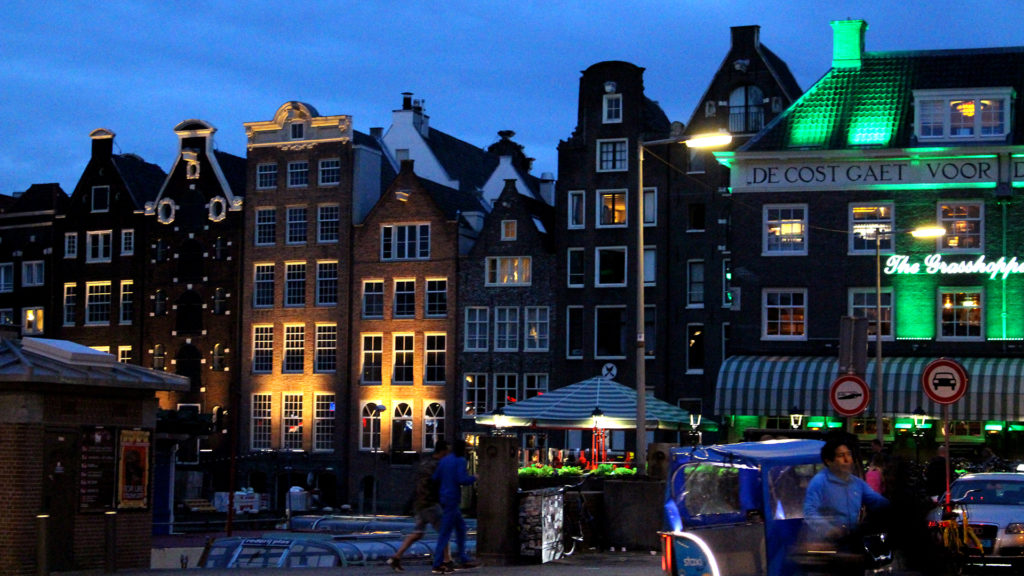 What can i say? Well I’ll begin with Beautiful…

So Amsterdam was amazing. I’ve been to a few European cities before and this, is definitely one of the most mesmerising cities. From the unique design of the buildings and the characteristic vibe of the streets to the bicycle overload and canal cruising, Amsterdam sums up to be a great place to visit. I hope this post gives you some knowledge of the Netherlands capital city.

Landing at the Schiphol airport and brushing by some shops it has to offer, such as GUCCI / ROLEX / HUGO BOSS / CARTIER and a few others, leads you straight to the Taxi queue. The cab drive is around 50 euros to the City Center, but if your smart enough to have an UBER account, your looking at half the price. The weather was pretty good at around 22 Celsius and clear skies, although the forecast was cloudy with a chance of rain *lucky me.

My hotel the NOVOTEL was around 20 minutes away from the centre by metro which wasn’t bad at all. Using the public transportation services was very easy and accurate, also not that expensive either as it costs around 3 euros for a 1 way ticket and 7 euros for a Daily pass. We decided to take the Metro which is a little bit faster than the Tram, and arrived at the Central Station which is the closet to the centre.

When I arrived at the city centre i was overwhelmed by the architectural structure of the buildings and the huge bicycle parking that was overloaded with bicycles, which immediately gave me a cultural vibe.

I arrived down town at around 5pm.. it was flooded with people, most of them tourists ” I’ve read that the population is around 1 million locals and has around 3.5 million tourists visiting per year”, and i definitely know why. 1st thing i did was walked to the Dam square, just a five-minute walk down the Damrak from Centraal Station takes you into this jam-packed square, mixed with locals and tourists day and night, there are plenty of food stalls, restaurants and shops galores.

The popularity of Dam Square might have you waiting for a seat at one of the many cafés and bars. Whatever the weather, there is always something going on here so expect lots of entertainment.

Some of the attractions in Dam Square are the Royal Palace “Koninklijk Palace, although no longer home to the Dutch Royal family”, opposite the Royal Palace you will see hotel Krasnapolsky and on the south side of Dam Square stands the National Memorial statue, erected in memory of Dutch soldiers and members of the resistance who died in World War 2.

There is a variety of shops in a sub street which is very convenient as it has all sorts of shops like ” Desigual, Forever21, Pull&Bear, River Island, Urban Outfitters, TOPSHOP, MANGO, ZARA, Bershka, Foot Locker,  H&M, LEVIS, ADIDAS, SIZE?, NIKE ” and many more.

I only window shopped as I was saving money for an upcoming vacation I had in August. After walking around for a few hours I grabbed a bite at “BURGER FABRIEK” in Warmoesstraat street which has a variety restaurants to choose of.

Once my batteries where refuelled it was time to head down to the Red Light district which is one of the most popular areas in Amsterdam De Wallen or De Walletjes and it’s the largest and best known red-light district in Amsterdam.

It consists of a network of alleys containing approximately three hundred one-room cabins rented by prostitutes who offer their sexual services from behind a window or glass door, typically illuminated with red lights. The area also has a number of sex shops, sex theatres, peep shows, a sex museum, a cannabis museum, and a number of coffee shops that sell marijuana.

By the way **No pics!!!** its not allowed to take pictures of the ladies. There is multiple streets to visit in the red light district, at some point it gives you the illusion that you are walking in circles since everything is so similar to each other. The place is very difficult to familiarise yourself with, but to be honest i don’t mind walking up and down the same streets all day.

Each time i did, i was discovering something i had missed previously. A few drinks after, a lot of walking and this headache out of nowhere that was smashing my head in, we headed to the hotel to get some rest…… WAIT A MINUTE! Out of nowhere is a lie… Actually out of the replacement of oxygen sent to my brain with weed.

Of course, that’s what it was. Honestly if your not a smoker and don’t want to give weed a shot, the weed flowing in the Air is more than enough for you. As you know weed is legal in Amsterdam, but on the other hand it’s illegal when drinking alcohol and driving bicycles.

If you are interested in buying Cannabis which is Legal in Amsterdam, you should visit a coffee shop, my buddies bought some from The Bulldog™ <– Click for more info. It might be a bit more pricey than the street deals you might find but it’s famously known and trustworthy.

Good Morning. 6:30am, a jog through the streets of Amsterdam lead me to an amazing journey of greenery, nature scent’s and a beautiful scenery, giving me a highly needed energy boost before work.

After a few tiring hours at work I was back on the streets of this awesome city. Around 7pm we decided to make our way to another part of the central area Rembrandtplein. The square has its origins from the defensive walls constructed in the Middle Ages to protect the city.

By the early twentieth century, the square developed into a centre for nightlife drawing artists, young people and tourists. To serve these visitors, several hotels, cafés and entertainment venues opened in the adjoining streets. The area continues to be popular with residents and tourists and it is just as amazing as the Centre is.

Beautiful architecture, similar but different at the same time. A very nice area if you’re looking for a night out. You will also find the Popular XtraCold Icebar Amsterdam, which you should definitely visit, let me know your feedback as I didn’t get the chance to go. As for clubs we tried Club AIR it had nice urban music and was nicely designed.

FYI I was very amused with the time it got dark, it was the first time I went to a club and it was not pitch black outside. “Is that why they where sunglasses in clubs on all the Music videos?” We had a few drinks and made our way to the Red District area. Yes again but this time there was a slight difference, the Red Light district became RED.

The windows light up with red lights and the women begin their night job’s. Its something that’s not seen in many places, so you definitely have to visit this area after 10pm. Not suitable for kids, although i’ve seen a few families with their young one’s walking around, I’m sure there gonna have plenty of questions to answer.

A couple of Kilometres after, our legs gave up and it was time head back to the Hotel. Unfortunately the public transportation closes at Midnight so we had to take a taxi back, was not a bad idea though, since we had an exhausting day.

Gym / Breakfast / Work… Lets skip that and fast forward to the city 🙂 Final day at work meant that we had plenty more time to explore. We started with a random stop with the tram.

With a direction towards the city center we wanted to see what was outside the city center. After a half hour walk we ended up at our destination, yes you guessed it, time for some food in a nice location, highly needed after a busy day.

The area was full of bars and club’s where a lot of locals hang out, so our next stop was surely there. Once we arrived we saw a number of bars and clubs which where flooded with people, we stopped at the place that had shisha.

As our final night came to an end we decided to check out a few bars & clubs and called it a night, making sure we got some rest for the long flight back.

The final day arrived. Unfortunately it was time to say goodbye to this awesome city i must say wasn’t easy at all to do so. It was a great week, I had an excellent time and managed to mark 90% off my check list, which I did not expect to do so at all. Nice food, good company and a great city overall was the outcome of this trip. Pretty damn good if you ask me.

If you haven’t visited Amsterdam yet then please do put it on your list, you will not be disappointed at all. Try and go during the summer period so you can enjoy all of the qualities of the city to the fullest potential.

I hope this post answers some questions you might of had and even better gave you some reasons to visit Amsterdam. If there’s something I did not mention, please let me know. I will be visiting Amsterdam again for sure and I will definitely add all the feedback to my list of things to do. Tot de volgende, take care!!!