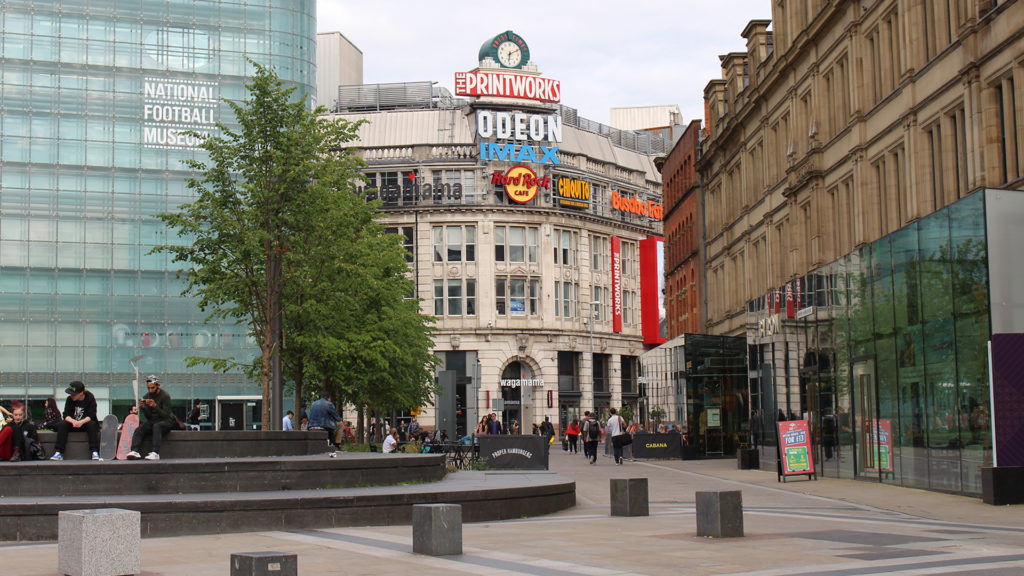 Manchester. One of my favourite cities…

I’ve been here 2 times before, this was my 3rd. I never seem to get bored of it. How could I? City centre is 20 minutes away from the Airport via cab which is very convenient after a 5hour flight, also the place I was staying at was 10 minutes to the city via tram and 15 via taxi. It’s always better to stay close to the city center, as it adds less transport cost’s and less waisted time spent in transport.

Woke up on Saturday and hit the streets for a jog to get my muscles refreshed and ready for the day ahead since they fell asleep on the 5 hour plane flight. A quick shower and some breakfast after meant it was time to hit the town. It took us 5 minutes to walk to the tram station and another 10 minutes on the tram to the city.

The tram thankfully drops you off right outside the ARNDALE Centre. The Manchester Arndale Centre is a large shopping mall in the center of Manchester and it is said to be the 3rd largest city-centre shopping mall in Europe. The mall is also connected with Selfridges and Marks and Spencer department stores via a link bridge.

It has a variety of shops and restaurants including some of my favourites like – ALLSAINTS, Drome, Foot Locker, Footasylum, Levi’s®, TOPMAN, Urban Outfitters and many more. *Click Here to see full list of shops & restaurants. I spent most of my days in the city centre because of this mall and due to the fact that im very picky with my shopping choices.

Manchester isn’t only about the shops though. Visiting the museums and art galleries like the Manchester Museum & Manchester Art Gallery are also a must see. Walking in the city centre streets is very easy and satisfying as they are very clean and organised.

There is some amazing architecture and vintage looking buildings like the Manchester Cathedral located on Victoria Street, the John Rylands Library located on Deansgate Road which is the longest road in the city centre at over 1 mile long and finally the Manchester Town Hall located in Albert Square (It has a beautiful design dominated by the clock tower which rises to 85 m).

After your tour around the city centre, you can hit the Shambles Square which is located opposite the entrance to Arndale from Exchange Square to have some food and drinks at The Old Wellington Inn. Exchange Square is located near the National Football Museum. Both Exchange Square and Piccadilly are used for screening public events.

There are many leisure facilities in the city centre. As you proceed to the Northern Quarter, centred on Oldham Street, which is known for its Bohemian atmosphere and independent shops and cafes, is dominated by buildings that were built before World War II.

The landscaping of the city centre has provided several public spaces including the newly developed Piccadilly Gardens at the end of Oldham Street, incorporates fountains, green spaces, a concrete wall, and a Metrolink station.

Another main facility is an Urban Entertainment venue – The Printworks, a large facility containing a cinema with an IMAX screen, numerous bars, clubs and restaurants and also Manchester’s first Hard Rock Cafe.

It features a twenty-screen UCI cinema complex by Vue Cinemas which includes North West England’s first IMAX screen, a Virgin Active fitness club, a Hard Rock Cafe restaurant and a Tiger Tiger nightclub. It’s a nice area to spend the night after a long day of shopping and walking around the city. The facilities are open usually until 1am so you have plenty of time to recover / eat / drink.

It has Europe’s largest food court in The Orient and the UK’s busiest cinema, attracting more than 28,500 visitors each week. There are over 11,500 car parking spaces and construction is expected to commence in 2016 on Metrolink Phase 4 which will create a direct tram link from the Trafford Centre to Manchester city centre via Pomona. Leisure facilities include a 20-screen Odeon multiplex cinema, a Laser Quest arena, Paradise Island miniature golf, a Namco Funscape with dodgems, bowling and arcade games.

The Trafford Centre has many things to do and honestly you can spend the whole day there. We started our day early at 9am so we had plenty of time to spend there. We took the bus from the City Centre which takes about 35 minutes depending on traffic. Once we arrived we hit the shops for about 4 hours, to then proceed to the food court and have some lunch.

After that it was off to the shops again, which gave us another 4 hours. Of course we were trying out all the different desserts we found along the way, a big selection of desserts I may say. Bubble Waffles, Ice-cream curls, Millie’s Cookies, Krispy Kreme Donuts are just a few of the temptations you will find among your journey in the shopping mall.

We decided to burn up some calories at the Laser Quest Arena, a fun and tiring experience, * make sure you take a change of clothes as we where sweating bullets by the end of our time, thankfully we had some extra clothes to change into.

Running and hiding inside a high intense war-zone like the Laser Quest Arena made as quite hungry also the fact that the last time we ate was 6 hours ago. There was plenty of choices for food as the food court is huge and full of restaurants.

“This is a worker bee and is a symbol of the city’s hard-working past, during the Industrial Revolution.”

Manchester for me is a comfortable city to visit. The things I like are all close to each other and easy to access, you may be asking what my favourite things are? well that’s easy, Clothes and Food. There are plenty of nice places to visit and many things to do, the beauty of it is that they are all in walking distance.

I will be visiting Manchester in December again tickets already booked, imagine, if I love this city in August then how can I not love it in December. Christmas Sales, Christmas Weather and Christmas Spirit is something I can never get enough of.