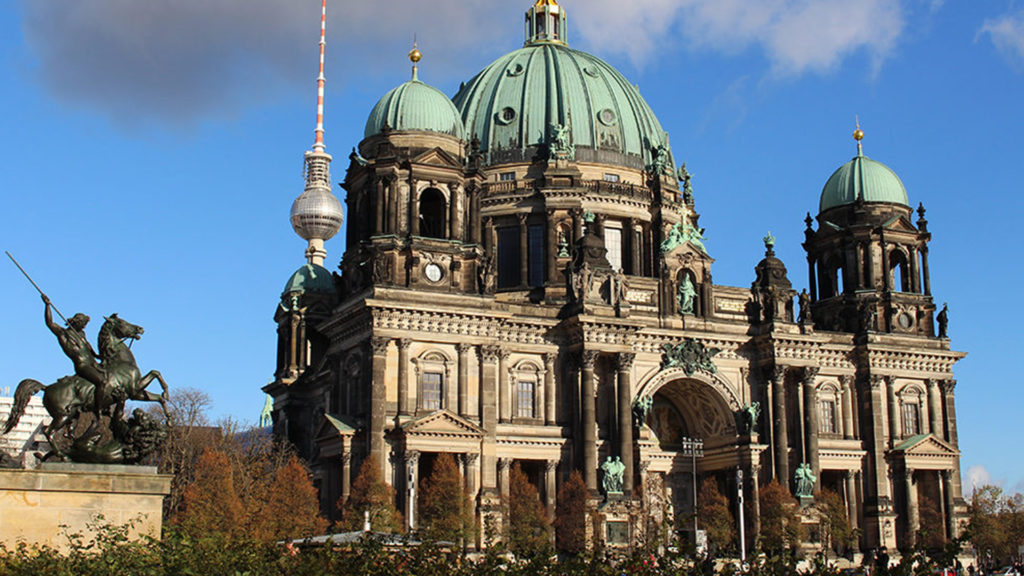 Back from my Trip to Berlin. Had a Lovely time. Lots of walking and lots of eating! Whenever i go to a city i have not visited before, i find that the best way to get to know it is by hitting the Streets. Which is exactly what i did. Got to the hotel dropped the bags and of i was. The first thing on my list was to visit The Brandenburger Tor also known as the Brandenburg Gate.

The gate served as the main entrance to the city of Berlin when it was first built while much later, before the two parts were united, visitors would come to Brandenburg Gate to climb to its observation tower simply to see the other side of Berlin.

On the gate you can see the famous sculpture that represents the Goddess of Victory. The sculpture was actually held in captivity in France where it served as a Napoleonic trophy. The gate’s design was inspired by the Propylaea, which was the gateway that led to the Acropolis in Athens while the decorations found on the gate reflect Greek mythology.

This was a 20 minute walk from the hotel i was staying at. Not that far at all, also a pleasant walk. The roads where very clean compared to other cities i have been to. Walking along-side the Großer Tiergarten ( Tiergarten Park ) was also a perk as it’s Berlin’s largest & oldest park, including family amenities, walking paths & a victory column. Berlin’s most popular inner-city park, located completely in the district of the same name. The park is 520 acres in size and is among the largest urban gardens of Germany.

On my way to the Brandenburg Gate i passed by The Memorial to the Murdered Jews of Europe, also known as the Holocaust Memorial. It’s a memorial in Berlin to the Jewish victims of the Holocaust. It consists of a 19,000 m2  site covered with 2,711 concrete slabs, arranged in a grid pattern on a sloping field. The slabs are 2.38 m long, 0.95 m wide and vary in height from 0.2 to 4.7 m.

They are organized in rows, 54 of them going north–south, and 87 heading east–west at right angles but set slightly askew. An attached underground “Place of Information” holds the names of approximately 3 million Jewish Holocaust victims, obtained from the Israeli museum Yad Vashem. The cost of construction was approximately €25 million. It’s an amazing and unique memorial, if you visit be careful you don’t get lost.

Passing under the Brandenburg Gate brings you to a popular boulevard named Unter den Linden ( under the linden trees ) located in the central Mitte district. Running from the Brandenburg Gate to the City Palace, it’s named after the Linden ( lime ) trees that line the grassed pedestrian mall on the median and the two broad carriageways. The avenue links numerous Berlin sights and landmarks. It’s a nice long walk, with a variety of restaurants and shops also the famous wax museum Madame Tussauds.

The Berliner Dom is the short name for the Evangelical Supreme Parish and Collegiate Church. It is located on Museum Island in the Mitte borough. The current building was finished in 1905 and is a main work of Historicist architecture of the “Kaiserzeit”.

My final stop for the day was the Alexanderplatz which is a large public square and transport hub in the central Mitte district of Berlin, near the Fernsehturm. Berliners often call it simply Alex, referring to a larger neighbourhood stretching from Mollstraße in the northeast to Spandauer Straße and the Rotes Rathaus in the southwest.

Alexanderplatz has been subject to redevelopment several times in its history, most recently during the 1960s, when it was turned into a pedestrian zone and enlarged as part of the German Democratic Republic’s redevelopment of the city centre. It is surrounded by several notable structures including the Fernsehturm (TV Tower), the second tallest structure in the European Union.

Alex also accommodates the Park Inn Berlin and the World Time Clock, a continually rotating installation that shows the time throughout the globe, and Hermann Henselmann’s Haus des Lehrers. I found plenty of shops and restaurants in the area and spent a good couple of hours in the square, which is pretty damn good after flying for 5 hours and walking for 2. I think it was a good idea to re-charge my batteries if i was gonna make it through-out the rest of the trip.

After a busy week working with no time to visit anything but the hotel i was staying at i finally got some time to head out. The Berlin Mall was a must on my list, so that’s where i made my way first.

In September 2014, the Mall of Berlin on Leipziger Platz opened its doors. Covering 76,000 m2 and offering 270 stores, this is the second largest shopping centre in Berlin and offers visitors a wide range of clothing, electronics, entertainment and gastronomy.

In addition, the new city district arising on the once war-ravaged Leipziger Platz is home to a fitness centre owned by Madonna, a hotel, an underground car park, and numerous commercial and residential buildings. On a rainy day The Berlin Mall is a great place to spend your time at. With a variety of shops, entertainment and a large food court, it gives you plenty of options to spend your time. ** Make sure you have some Currywurst Sausages**

Tfhe Berlin Mall is not the only option when it comes to shopping though. In the west of Berlin, in the Bezirk Charlottenburg, the famous and large street Kurfürstendamm can be found. This street has an impressive history but also offers many shops for tourists and locals of Berlin. This area is mainly known because of the department stores KaDeWe and Peek and Cloppenburg. Besides that, you can find many delicious restaurants in the area around Kurfürstendamm and it is worth to visit the Memorial Church if you want to combine this location with a touristic attraction. The shopaholic will have a great time at Kurfürstendamm because there are over 100 shops to be found.

Kurfürstendamm is already worth a visit just because of the KaDeWe. Many department stores are big and impressive but the KaDeWe (Kaufhaus des Westens) is unique in his kind. With 60.000 square meters of shopping-paradise it might be worth some hours of your time. The products vary from cosmetics to clothing and from music to furniture. A must-see is also the sixth floor with its delicacies from all over the world.

I highly recommend this area as it is one of my favourite areas in Berlin but don’t count on my judgments, go and visit it you will not be disappointed at all. Also make sure to grab some Pizza at the Losteria Restaurant, where the Pizza does not fit in the plate and is very yummy. You cant go wrong with that but make sure you go after shopping, you will need a big appetite to finish it.

I must say, Berlin is beautiful in its own way. I highly suggest Berlin as your next travel destination as it is a lovely city with a variety of fun things to do and see. I will be definitely coming back here to get the full experience and spend a little more time at the places i have seen this time around. PLUS i love the City too much to not come back.

Let me know if you’ve been to Berlin and please do suggest anything you think i should visit next time i go. I hope i gave you some sort of knowledge regarding some things to do in Berlin. Im sure there’s plenty more which i will probably discover next time. Till next time travel, travel, travel and be safe.