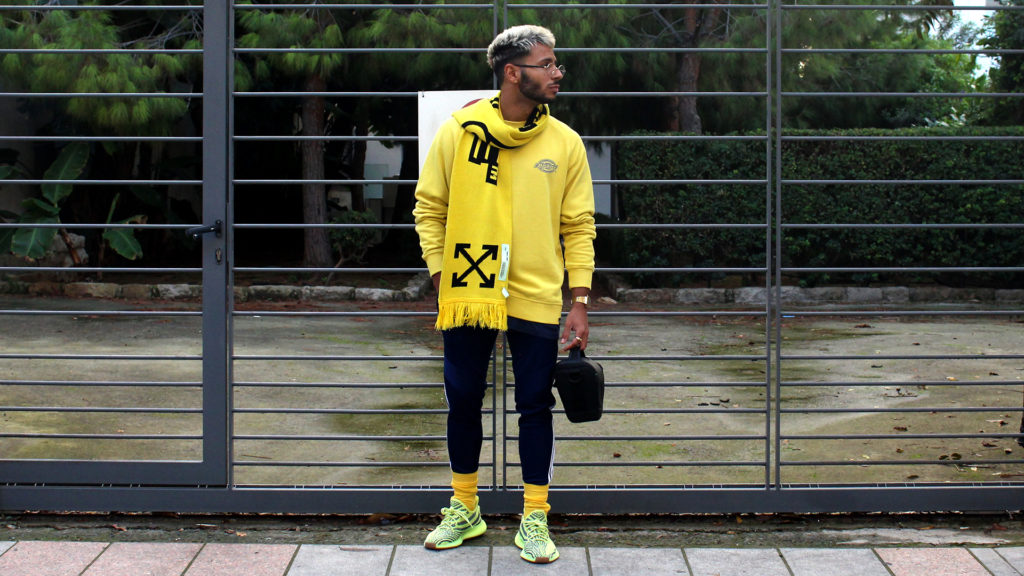 Sometimes when you live in a city and you are busy doing your day to day activities, you forget that you can actually enjoy it. The majority of us take the places we live in for granted. Waiting for that vacation we are going to take to Relax and forget about all our work, tasks, neighbours and bills ( well not really). I can promise you, I myself is definitely one of them. However Limassol is a beautiful city with much more to do than just chilling at the Beach. Going out and enjoying some of the historical sites mixed with the new modern and hip restaurants and bars is most definitely a must.

I am wearing a Yellow Dickies sweatshirt matched with my Off-White scarf. The adidas navy blue track-pants added to tone the yellow color explosion down. Yellow socks and the Yeezy Semi Frozen yellow sneakers on my feet. With a Primeknit upper, finished in an energetic bright yellow hue that extends to the laces, heel tab, and Boost-infused ribbed rubber midsole.  Zebra-like black stripes add another design dimension to the upper, along with a tonal side stripe emblazoned with ‘SPLY 350’ in reverse red print. A gum rubber outsole adds grippy traction to the eye-catching design. Navy blue and Yellow is one of my favourite color combinations, giving the look a bright yet settle look.

Based on ancient graves found in the area, it can be concluded that initially the city was formed back in 2000 BC. Thanks to the rich and long history of Limassol and the surrounding area of the city, there are a lot of historical sites. The Old Town of Limassol comprises a series of narrow streets branching out from the city’s old fishing port. Home to busy shopping streets and intriguing historic attractions, this vibrant area of the city is equally popular with locals and tourists. Something also to be seen here is the medieval Limassol Castle was the site of a royal wedding in the Middle Ages between Richard the Lionheart, King of England, and Berengaria of Navarre, which now houses the Cyprus Medieval Museum.

The historical part of Limassol also includes the Old Port which is located between the modern Limassol Marina and promenade and the newly re-designed Molos area. Once the old port was the main port of Limassol, its original foundations were laid during the British occupation of the island in the late 19th century. Today the old port of Limassol is a small Marina with moored fishing boats, luxury cruise ships and a freshly built walking area giving it Life from the morning till the evening with the addition of a variety of cafes and restaurants. This is a place not to be missed and a place that I am proud to call home.

** If you cant find the look online due to stock limitation or change of season let me know and I will find you something similar. **