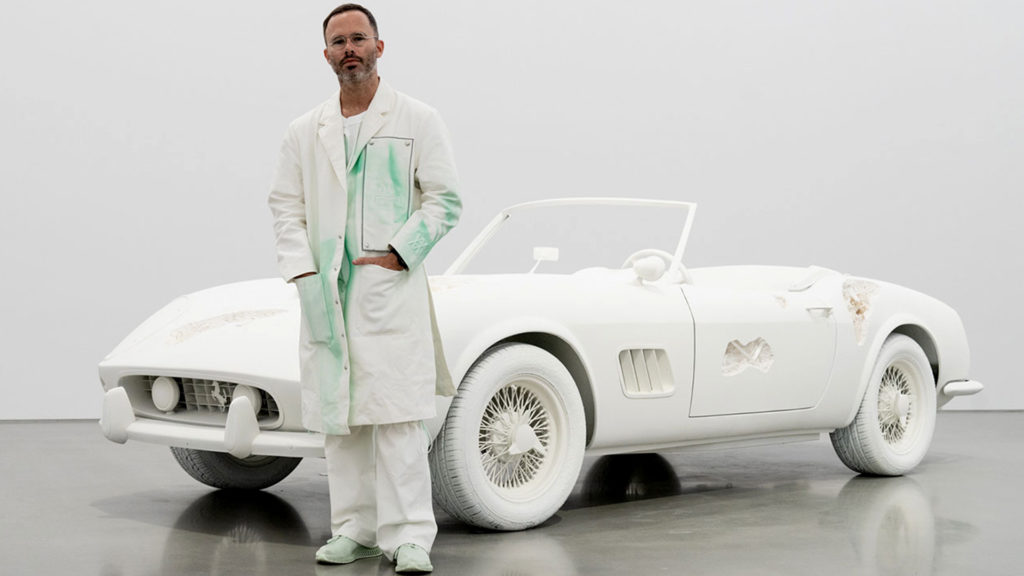 The elusive point where sculpture, architecture, and performance meet, the place American artist Daniel Arsham calls home, is capable of great inspiration and impression. Always at the edge of art and architecture, experimenting with various approaches and practice, this young colorblind artist has earned the praise of both ordinary museum-goers as well as extravagant show-business stars. His numerable collaborations include projects done with James Franco, Merce Cunningham, Heidi Slimane and Pharrell Williams.

He has also received commissions from luxury fashion brands such as Calvin Klein, Louis Vuitton, Christian Dior and many more. A Cement looking Porsche with Crystals inside and an amazing Dior runway design where some of the main elements that made me a big fan of Daniel’s work. In fashion and outside. I strongly believe that fashion and the fine arts have, and always will, go hand-in-hand. This is where Danial Arsham’s work, proves that my belief’s are one hundred percent % valid.

Arsham’s Interest In Architecture Sparked by A Hurricane

Daniel Arsham was born in Cleveland, Ohio, and grew up in Miami. He graduated from the Cooper Union in New York. Interestingly, what first drew him to the subject of architecture was an incident of violent weather in his childhood. Witnessing his childhood home become the wreckage of a hurricane and seeing “what’s inside the walls” impressed upon him a fluid understanding of architecture.

image of objects seemingly there under a bed sheet or inside the wall,

His installations play with the boundaries of space and time as the walls themselves become pieces of art, warping and disappearing, oozing over, under and hiding objects and bodies, as staircases lead nowhere and nature overpowers structures. Arsham seems to enjoy a paradoxical, sometimes dystopian, view of the past, present and future, placing us in the proverbial shoes of our ancestors.

He encases everyday objects in volcanic ash, seemingly found at a future archeological excavation site. Another staple of his work is the play with negative space, objects seemingly there under a bed sheet or inside the wall, but actually hollow, only their resemblance painted by the solid sculpture of what is usually a soft and flowing fabric.

Color Blindness As A Catalyst

The trait that sets this quirky artist apart is his color blindness. He can see approximately twenty percent of what a person can normally distinguish. Reflecting this is his art, nearly always lacking color, monochromatic at the most. A recurring symbol is the moon and her black-and-white dance. “In space, there is a lot of black.” Arsham says. Looking at all of Arsham’s works, a distinct preference for white and gray tones can be noticed. Is he trying to relate his condition through his work?

What is certain is that Daniel perceives the world differently than we do, a thing every artist aspires to, even if he wasn’t much aware of it in his early years. He considered his color-blindness a mere fact of life, a small nuisance, or not even a change at all, seeing as his parents never treated him very differently or put much emphasis on his condition. Even so, as an adult, he acknowledges the vast difference in perspectives of people, especially in the case of conditions such as these.

He has experimented with correcting his vision through special optical lenses that refract light and allow colorblind people to see more differences between colors, inspiring him to use color for the first time in his 2016 solo exhibition at Galerie Perrotin in New York, titled Circa 2345. Using calcite crystal, a substance richly blue in color, Arsham cast today’s sports items into intensely colored sculptures, including an explorable cavern made entirely of sports balls. Even so, the exhibition hints at the author’s life without color, as no other colors are used but shades of blue and purple.

Snarkitecture, A Paradoxical Blend Of Disciplines

Snarkitecture reworks common materials and everyday objects into perplexing landscapes: hundreds of white casts of Air Jordan 1s hang from the ceiling of KITH’s NYC flagship; a topographic display of perfume bottle casts sprawls across Odin in New York; an insane lilac marble run snakes around a gallery and COS store in Seoul, South Korea.

Other projects include the “Fractured” furniture collection made in collaboration with Pentatonic, a Caesarstone installation displaying the transformation of water, and Arsham’s own three-shoe collaboration with adidas exploring the past, present, and future.

In March 2019, Snarkitecture opened a permanent residence in Hudson Yards named Snark Park. The firm said the exhibition space’s first presentation, “Lost and Found,” sought to craft memorable experiences by “infusing art and architecture with a sense of play.” In practice, this meant hidden visual and tactile surprises for visitors to discover, giving even the most mundane objects new life.

Daniel Arsham’s biggest moment in fashion came when Kim Jones enlisted him to work on Dior Men’s Spring/Summer 2020 show in Paris. Arsham brought his “Future Relic” aesthetic to the brand, including a plaster recreation of Christian Dior’s office, complete with a hung hat and trench coat, telephone, and desk. “It’s been calcified in my process,” Arsham explained at the time. “It’s kind of this perfect relic of that moment in time.”

A dissolved clock and giant eroded letters reading “DIOR” with rose quartz appearing to grow out of the rot reflected both designers’ fascination with decay. The floor was inspired by the artist’s 2017 pink sand recreation of a Japanese garden, with models “destroying” the runway as they walked through the sand.

As for the items worn by the models, the collection “like Arsham’s own work” was like a futuristic time capsule. Jones channeled the artist’s approach by reimagining the B23 and B24 sneakers in Arsham’s signature blue calcite and rose quartz, with distressed baseball caps by Stephen Jones, miniaturized versions of prosaic objects courtesy of AMBUSH’s Yoon Ahn, and a recycled version of Dior’s Toile de Jouy print.

Daniel Arsham became one of todays most important artists by showing our destroyed future. “Fashion’s favorite artist” is a contested title. But whether inspired by Jean-Michel Basquiat, Futura, KAWS, or Takashi Murakami, the fashion world tends to gravitate toward artists who blur the lines between “high” and “low” culture.

However Arsham has carved a niche and still won acclaim and recognition from numerous quarters, including fashion, even as he deviated from this well-trodden path. What are your views and likes of Daniel’s work? Who is your favourite artist? Let me know as it is a topic apart from fashion that I am a huge fan of. I actually just bought he’s Snarkitecture book which I will be talking about once I receive it.

In a time when technology can appear to develop and become obsolete in the space of a heartbeat, Daniel Arsham captures the ephemerality of our material world. He tells us a story about ourselves, what we make, and where we’re heading even as we live it or wear it.

Next Post The Type Of Bags Every Man Should Have